Roger Dean was born in Ashford Kent, England in 1944. He is internationally renowned for his unique style of album cover paintings, logos, typefaces, and organic architectural designs.

The album covers of bands such as, Yes and Asia became windows into Dean’s world. The covers portray richly coloured landscapes where continuously cascading waterfalls and pools flow upon floating islands, these are recurring themes throughout his work. 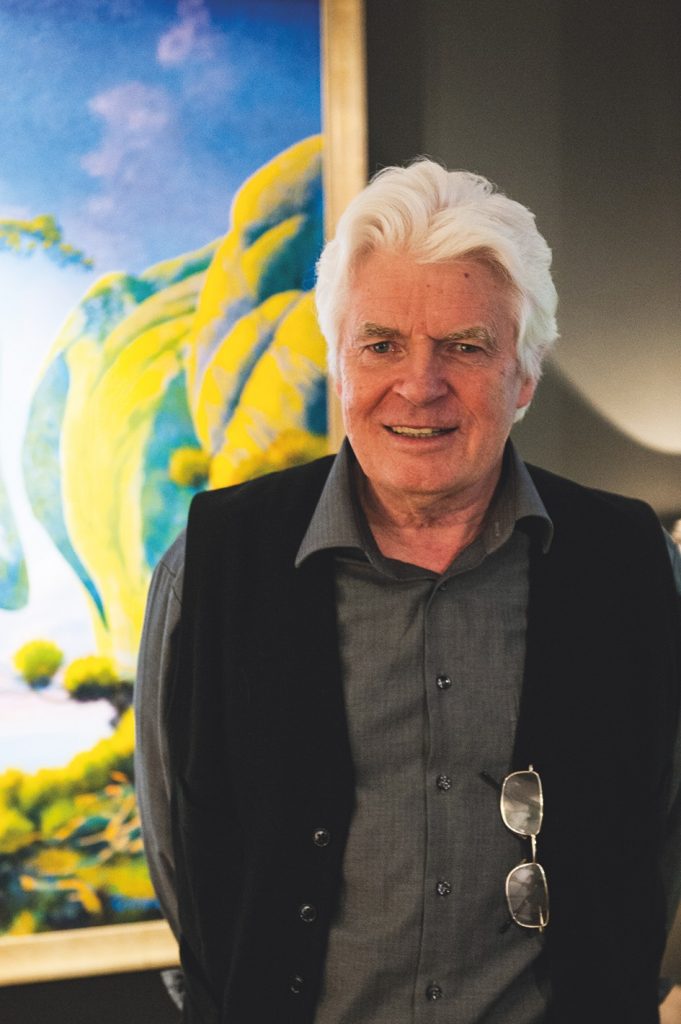 When Dean left the Royal College of Art in 1968 his first commission was to design furniture for Ronnie Scotts’ Jazz club in London, this eventually lead him to produce a cover painting and logo for Osibisa, a Ghanaian and Caribbean band producing Afrobeat music.
The painting that Dean created for Osibisa’s cover, depicted a brilliantly coloured, winged flying elephant and an equally elaborate and colourful logo for Osibisa. This image and logo were a dramatic contrast to the generally more conservative portraits usually seen on the cover of albums of that time. Dean’s brightly coloured record covers for Osibisa were often used to decorate the windows of record shops, bringing, ‘Happy Music’ music to the grey city streets of seventies London.
Following on from his successful collaboration with Osibisa, Dean was commissioned to produce a painting for an album cover for a band called, Yes.
The Yes logo became the visual signature of the group and was recognisable, not only from Yes’s record covers, but it was also imitated in style, in graffiti across the world.

The first painting Dean produced for Yes became the cover for their Fragile album and marked the beginning of a forty seven year association between Roger Dean and Yes.
Amongst Dean’s most well known paintings for Yes, are the covers for, Fragile, Relayer, Tales from Topographic Oceans and Heaven and Earth.
The cover painting for, Tales from Topographic Oceans was voted the best album cover of all time, in a Rolling Stone readers online poll.
Some have regarded the collaboration between Yes and Dean as his most successful however, Dean is continuing to create paintings for bands such as Asia, and more recently for Steve Hackett’s, album, Premonitions.
It has been estimated that over a hundred million people have, at one time, owned a piece of Dean’s art, either as an album cover, or as one of the many posters that were made of his cover paintings.
Dean is also known for his logo designs for companies including, Tetris, Virgin, Harvest, Vertigo and Psygnosis.
His career as a painter and typeface designer, are just two aspects of Dean’s multi-faceted career. Roger, his brother, Martyn and the printing company, Chevalier of Rotterdam collaborated in publishing over a hundred fully illustrated books for the same price and format as a record album. Their company, Dragon’s Dream became a market pioneer in the publishing business, bringing the work of artists such as Syd Mead, Alan Lee, Michael Kaluta, Jeff Jones, Kelly and Mouse, Frank Hampson and Bellamy to an international audience.
Album Cover Album volumes 1-6 were visual records in book form, of that brief period, when art and music came together as a unique art form that was available to anyone who could afford an album.
Dean’s M.A. thesis was written on the psychology of space and his designs for living homes have been based upon research that gives priority to these concerns. His organic architectural designs were ahead of their time, as well as aesthetically pleasing. Human in scale, his designs focus on the intuitive, the need to feel safe and calm within a domestic environment.
His work is in various private collections, as well as the V&A Museum in London and the MAK Museum Vienna.