Roger Dean has designed a house for the new millennium, it is beautiful, environmentally kind, but cheap and quick to build.

It began as a college project to design a child’s bed and grew into a radically new form of architecture. The curvilinear buildings that appear in Dean’s paintings and album covers are known around the globe, and his organic style has been much imitated.

Clarity of light and colour are his trademark, but at the heart of much of his work are buildings that appear to have become part of the landscape. 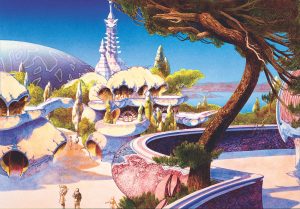 These are architectural renderings of structures that will be built.

The departure point for this new style of architecture was a child’s bed.

Dean’s research for a project to design a child’s bed highlighted a critical aspect of design that became the basis for all his future work on living environments.

He questioned dozens of children about what they liked, or disliked, about their beds and bedrooms.

Again and again, when they talked about feeling uncomfortable and they were referring to the “feel” of the room. They told him that they were afraid of spaces under the bed, where monsters might lurk; or the shapes made by clothes hanging on the back doors, or even highly patterned wallpapers.

When he asked them what they would like, the children described caves, or tent-like structures. They wanted to be enclosed; hidden from view, but able to see out. In other words, in order to feel comfortable, they had to feel safe.

In adults this primeval instinct to seek security is overlaid by ideas of what is or isn’t good taste.

A child’s intuition however, is still apparent in the way adults behave in theirdaily lives. For example, when someone goes to a restaurant to enjoy a meal they tend to choose a table in a corner with their back to a wall, so that they can see what is happening around them, and no one can approach unseen from behind.

Dean argues that to be able to control space, is an intuitive need, especially when we are at our most vulnerable.  We may not be consciously aware of this but nevertheless it often dictates our response to the space we inhabit. So the ability to control and view the entrance and exit to a space that a child is sleeping in, allows that child to feel safe.

Dean applied the same criteria when designing habitable spaces for adults, so when he came to design a bed for adults, he added steps up to it, with a clockwise rise. “I didn’t realise for a while that if I’d made them go the other way it would have felt dreadful,” he says. “I subsequently found that this clockwise rise to a stair, is incorporated into the design of a medieval castle, so that anyone attacking with pole arms or swords would all be off balance.” It gives the advantage to the occupant and this is understood both on a conscious level in the design and unconsciously by the inhabitant.

The threat of military attack may have declined, but the need for security and privacy is, if anything, more important in the late 20th century. The key to Roger Dean’s architecture is including in his designs the strategic control of space by the occupant.

To be comfortable in a house, it must make you feel safe.

The principle that all domestic spaces needed to enable the occupant to feel safe and in control of their environment, led Dean to design rooms that can be self-contained, but connected in clusters, to form houses, flats, hotels, office towers, or even entertainment centres.

These buildings are designed to enhance rather than stand apart, or above their surroundings, so it can make sense to enclose them in earth and embed them in the landscape.

Dean views the role of architecture as a natural extension, both of our need for accommodation, and an existing landscape. The landscaping of the location that the home will be situated in, has as important a contribution to the look and feel of a home, as the building itself.

The key to the production of these house designs, is the use of, Gunnite, or sprayed concrete. A layer of plaster and hessian is laid over a reusable fibreglass mould of the interior of the room, divided into three or four pieces per roomwhich are then assembled, on site.

It can take as little as six hours to complete a one-storey four bedroom house. Wiring is installed into this as yet delicate structure. The strength comes when steel rods and Gunnite are added. Pumice beads for are used for insulation.

A team of three to four people could “build” such a home within a day, adding ceramic vents and chimneys.

The infrastructure, however, takes some three to four weeks to cure.

The cost of producing a Dean house compares favourably with conventional units of similar specification, but is uniquely, a design that provides a home that is both beautiful and a calm place of sanctuary.